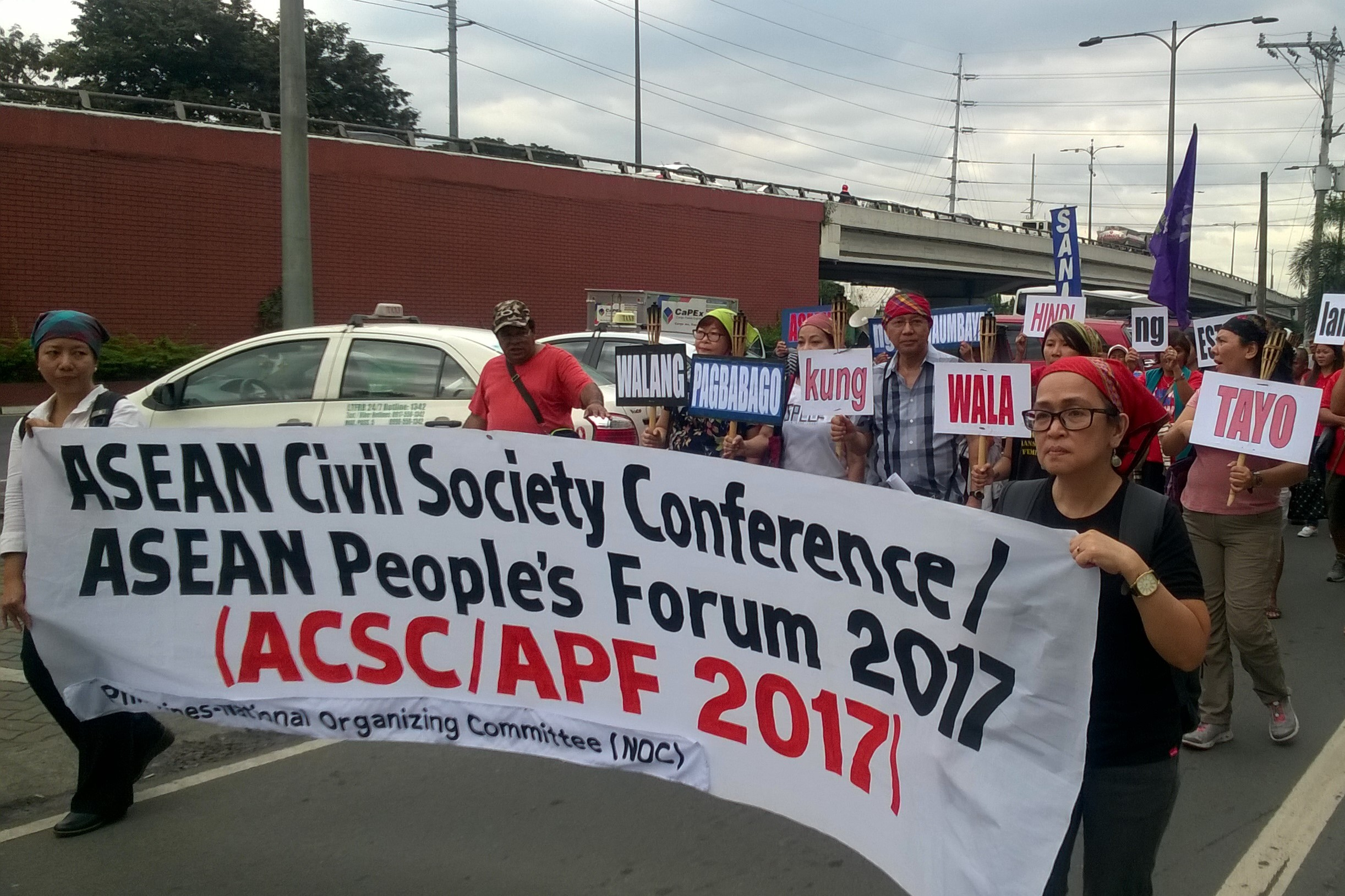 The ‘Principle of Non-Interference’, the Association of Southeast Asian Nations’ anachronistic view on state sovereignty, is the leading obstacle blocking deeper progress in the region. It also serves as a smokescreen that enables rampant human rights violations to surface. A radical overhaul of this union is long overdue – and it must come from the people themselves.

The European Union (EU) and the Association of the Southeast Asian Nations (ASEAN) are two of the world’s foremost regional integration projects. And while the EU can brag that theirs is a bloc based on values – the promotion of human rights, democracy, the rule of law, protection of minorities, etc. (a debatable issue in itself, especially in the current political environment) – the same cannot be said for ASEAN, despite having similar paper instruments that prove otherwise.

With its foundation in 1967, ASEAN could have mirrored the EU as a regional organization advancing the collective peace and stability among its member states. But the realities of the Cold War in the subsequent years were a real hindrance to such a development and it was only until the early 21st century did the bloc take steps in launching the ASEAN Charter, a landmark document with the genuine intent to set up an EU-like institutional framework as well as spearheading a more liberal political discourse.

Nevertheless, all ten of its member states have been accused of grave violations of the ASEAN Charter’s provisions on upholding international law with regards to human rights. In a 2017 Rappler article citing Human Rights Watch (HRW), it was reported that “by just about every measure – freedom of expression and peaceful protest, religious tolerance, non-interference in civil society, respect for democratic principles, fair treatment of refugees and migrants – the region is falling deeper into dictatorship, repression, and rights abuse.”

Whether it’s Brunei’s strict imposition of sharia law, the Cambodian prime minister’s continuing concentration of power, extrajudicial killings in the Philippines, the military junta in Thailand, Myanmar’s genocidal campaign against the Rohingya, Indonesia’s failure towards a genuine democratic transition since the end of the Suharto era, the Laotian and Vietnamese Communist governments’ continuing crackdown on oppositional voices as well as Malaysia’s and Singapore’s hostile policies against dissent, Southeast Asian countries find themselves distanced from the promises of an instrument of regional solidarity.

ASEAN’s “deafening silence” regarding human rights violations is rooted in one of the foundational principles of the regional organization, namely the principle of non-interference. This principle, according to HRW, basically acts as a “de facto code of silence,” which subsequently leads to inaction and helplessness within the bloc when it comes to rampant rights violations.

Although the creation of the ASEAN Intergovernmental Commission on Human Rights (AICHR) in 2009 and the adoption of the ASEAN Human Rights Declaration in 2012 were deemed as milestones, HRW regarded the subsequent developments as a failure by stressing the “lack of meaningful and substantive human rights policy or actions in its 50-year history.”

For one, the AICHR has no competence whatsoever to enforce human rights statutes and its mandate is merely a consultative one in which its operation is done through consensus among the ten representatives of the bloc’s member states, who at the same time enjoy veto rights.

Despite these obstacles, ASEAN has still been reported to become the next EU, at least according to certain government officials and those working on the realization of the ASEAN Economic Community (AEC). Doubts exist as to its path of achieving it, even with the AEC’s establishment of a single market, considering the challenges posed by economic integration of countries with hugely distinct stages of development and social systems and different political histories that are often mired by corruption and mistrust.

Therefore, it is to be expected that its desire to make the best out of this economic project might be overshadowed by its inefficiency, in particular when it comes to issues regarding the promotion and protection of human rights and democracy.

Civil society organizations advocating for better social protection measures and more democratic participation in the political sphere around the region have criticized the AEC as doing the opposite, instead exposing it to become a neoliberal and elite-driven project that creates more inequality and marginalizes the socially weak by prioritizing the pursuit of policies such as market liberalization and deregulation at the expense of popular welfare.

With the intention of boosting liberal economic integration initiatives through blueprints that would be implemented in the subsequent years, the AEC was seen to be a move by ASEAN to have a more effective impact on its citizens‘ lives. But critics such as Walden Bello have pointed out its flaws and move in the wrong direction; ASEAN has merely been an abstract entity distant from the ordinary people of Southeast Asia.

The current conjuncture reflects a lack of political will from national governments to pursue a more reformist agenda that would overcome the bloc’s weak institutional instruments as it contradicts the interests of member states whose rights records are also diminishing. The longer this continues, the more critical it is that these issues mandate collective action and coordination at the regional level.

And here is where the EU can take a more genuine stance and where it can strengthen its comprehensive approach to foreign policy. So far, it has not produced any efficient policy on shaping reform initiatives whatsoever. Despite the European Commission’s statements of successes in promoting EU values abroad, the realities produced offer nothing but lip service. This is articulated in some reports that have emerged regarding the EU’s continuing failure to promote its “values” in the Global South.

The EU’s mandate in global affairs is to advance the foundational values that it pledged to uphold when the Union was created, which meant the consolidation of democracy, the rule of law, fundamental rights and freedoms and the respect for international law. Yet the EU’s insufficient action in addressing the humanitarian crises currently plaguing ASEAN states is an alarming development for the Union’s foreign policy.

Empowering the Grassroots towards People-Centred Regionalism

The EU must indeed take a brave step, considering the bloc’s leading role as a supranational union with unprecedented competences that can shape nation-state policies as well as foreign affairs. If it cannot persuade governments to change, then it must start to engage with civil society actors and grassroots movements and help them collectively pave the way towards a reformist and people-centred regional integration.

But one huge challenge to all this remains to be the fact that ASEAN member states are continuingly resisting any input and engagement coming from their respective civil societies. Concerns that have been consistently raised by these actors in their engagement with ASEAN governments include diminishing democracies that sustain a deficit of popular participation in decision-making processes within the bloc as well as weak social protections and access to justice against human rights violations and rogue regimes.

This view is not only shared by civil societies in the Southeast Asian region, but also by the European Parliament (EP) and its networks. A 2017 paper by the EP’s Directorate-General for External Policies emphasized the imperative to promote “people to people relations” by “democratizing regional governance and involving civil society in the decision-making process” as means to gain the credibility of becoming a legitimate regional union.

The EP also reiterated the need for EU and ASEAN to adhere to their mutual principle of safeguarding fundamental rights and freedoms as enshrined in their respective foundational documents as well as in bilateral agreements ratified by both unions, which has proven to be a challenge when implemented. This trend all the more supports the ideas of an enhanced engagement with non-state actors and a more dedicated and consistent dialogue with member states regarding these issues.

It is understandable that lecturing governments would lead to an unproductive relationship and further alienate state partners, but the EU should affirm existing alternatives towards promoting fundamental principles they hold sacrosanct and universal. ASEAN’s core value of non-interference should be condemned. Paying lip service to the bloc and to the individual member states would be deemed as an unproductive move and a missed opportunity for Europe to prove itself a responsible and capable global actor.

Recognizing the essence of NGO-led congresses and conferences is one way to enhance a committed engagement toward change. For instance, the 2017 ASEAN Civil Society Conference and the ASEAN Peoples’ Forum, which gathered various progressive political movements and civil society organizations as a counter pole to a number of official ASEAN summits last year. A rally held in Manila at the 50th anniversary of the bloc in August called for an alternative regional integration that must be undertaken and stressed the importance of social protections that affirm every individual’s right to live with dignity.

In a collective call, they demanded structural changes to realize a socially sustainable ASEAN, emphasizing on addressing “democratic participation, gender equality, and protection and promotion of rights of workers and vulnerable groups.” They also called for making binding existing regional documents and treaties that have a social dimension.

These structural changes can only happen when the grassroots succeed in pressuring dominating state powers into realizing them, as well as ensuring that national and regional institutions are to be advanced and be given the competence to implement and enforce provisions that underline fundamental human rights, socioeconomic protections and progressive ideals. Only through such a radical reorientation of the existing system can a case for an alternative regional integration be made.

Joshua Makalintal is an undergraduate political science student at the University of Innsbruck. His main interests revolve around political developments in the Global South (the Philippines and Southeast Asia in particular) focusing on the prospects and challenges facing democracies as well as the role of civil society and progressive movements in those countries. He is currently the vice-chairman of Nihil Addendum. You can reach him through Twitter: @joshmaks